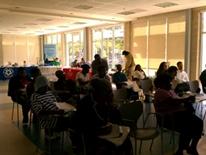 Ward 7 is distinguished by its leafy streets, single-family homes, transit stations and above all, its greenspace. It is home to a number of Civil War fort sites that have since been turned into parkland including: Fort Mahan Park, Fort Davis Park, Fort Chaplin Park and Fort Dupont Park, the largest city-owned park in the District. Ward 7 is also home to green spaces such as Kenilworth Aquatic Gardens, Watts Branch Park, Anacostia River Park and Kingman Island.

The neighborhoods of Ward 7 are proud, distinct and numerous. Deanwood, situated on the north end of the Ward, is one of the oldest communities in the northeast quadrant, and has a pleasant small-town character with its many wood-frame and brick houses. To the south of Deanwood are neighborhoods such as Capitol View, Benning Heights and Marshall Heights, characterized by a variety of single-family homes, duplexes, garden apartments and apartment buildings. Further south, neighborhoods including Hillcrest, Dupont Park, Penn Branch, and Randle Highlands have a very suburban character, dominated by single-family detached homes with large yards and lawns. Ward 7 also has an extensive waterfront along the Anacostia River, and riverfront neighborhoods have their own unique identities. River Terrace, Parkside, Mayfair and Eastland Gardens abut the east side of the river, while Kingman Park and Hill East/Reservation 13 sit to the west.

Neighborhood and corridor plans for Ward 7 include: