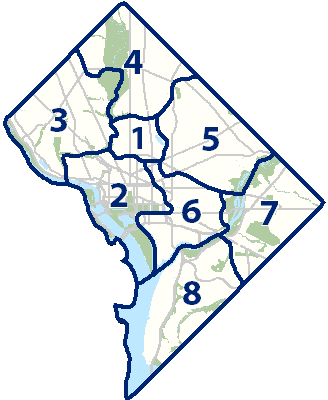 Much of what is now Ward 8 was farmland during the early history of Washington, DC, and a rural character is still sometimes evident among the houses, apartment buildings and institutions of the ward. The historic Anacostia neighborhood is the oldest in the ward, having been founded as Uniontown, one of Washington’s first suburbs, in 1854. It has a variety of wood frame and brick houses and townhouses, as well as grander homes such as Cedar Hill, the Frederick Douglass House (pictured at right). Further south is the neighborhood of Congress Heights, which has the largest commercial area in the ward, which runs along Martin Luther King Jr. and Malcolm X Avenues, as well as a number of garden apartments and single-family bungalows. Washington Highlands is located further south, and is home to many apartment complexes, as well as new single-family homes at Walter Washington Estates.

The neighborhood of Bellevue sits at the far southern end of the District, and has many garden apartments, one high-rise apartment building and some 1940's era detached homes with yards. Ward 8 also has several large federal and local institutions. Bolling Air Force Base, for example, is in many ways a small town of its own, stretching along the Anacostia riverfront. Saint Elizabeths Hospital is a large campus with sweeping views of the city. The Blue Plains Wastewater Treatment Plant and DC Village both take up significant acreage at the southern tip of the city. The Ward has some of the district's largest green spaces, including Oxon Run Park, Fort Stanton, Anacostia Park, and Shepard Parkway.

Contact the project team: [email protected] and visit the planning page: publicinput.com/CongressHeightsPlan to get involved!

The Comprehensive Plan Area Elements that falls within Ward 8 include: