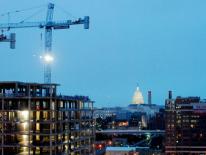 The visual prominence of the US Capitol building, the monuments on the National Mall, and key landmarks throughout the city, have been a fundamental part of our city’s design legacy since it’s founding. L’Enfant’s plan for Washington deliberately aligned streets to take advantage of natural topography and vistas of monuments and important buildings. The plan - and the views it prescribed - were further strengthened by the Height Act of 1910 which preserved the horizontal character of the city and ensured the city’s skyline would be dominated by public buildings and monuments.

Views of the US Capitol building in particular are important because the building serves as a national and civic symbol for our city. Vistas and views of the Capitol dome announce one’s entrance into the city and help orient us when we are lost. It is the backdrop to our National Mall and the nation’s parade route; Pennsylvania Avenue. Many of the original L’Enfant avenues and boulevards are oriented with key views of Capitol building but lack a coordinated approach to streetscaping and building design to frame and celebrate them. There are also several other important views, though less celebrated, such as view of the Capitol dome from National Airport or from New York Avenue as one enters the city. These views unlike those down streets are not protected by a street right of way, and are potentially threatened by building encroachments or insensitive landscaping.

Office of Planning (OP) is directed by the Comprehensive Plan of the National Capital to conduct a “review of desirable views, creating view plane diagrams, affording analysis of desired possibilities, and developing zoning regulations accordingly” Action UD-1.2.B: Creating View Plane Regulations. The study will investigate and analyze views of the Capitol Building Dome and the Washington Monument from important public spaces, major streets, and gateway entrances to the city. A variety of techniques will be utilized to locate and examine views. These include interviews with OP staff and other key experts to solicit information about potential important vantage points throughout the city, GIS analysis of view sheds from the Capitol Building Dome, and field documentation of views. The study will also include an analysis of case studies from other capital cities with view shed protections to highlight best practices and potential implementation methods.