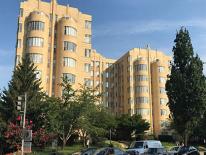 The District of Columbia’s allowances for buildings that extend into the public right-of-way have no equivalent in any other city in North America. They have evolved since 1872 to provide greater protections for public infrastructure and in response to changing architectural styles. For example, a change made in 2013 allowed for window projections on residential buildings in commercial zones. Prior to this change, window projections other than show windows were prohibited on any type of building in commercial zones.

Projection allowances for bay and oriel windows, towers, porches, and balconies have resulted in the remarkable pattern of building articulation that contributes to DC’s distinctive architectural character. More specifically, projections most often result in the following three defining characteristics:

Activation of public space at the sidewalk is a fourth characteristic that defines some projections. Show windows emphasize transparency and a rhythm of storefronts in commercial areas; porches and balconies encourage leisure activities and social interaction along residential streets; and, awnings, canopies, and marquees create a hierarchy of entrances into commercial and residential buildings.