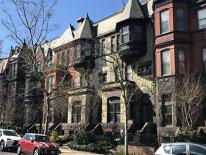 In Spring 2016, the Department of Consumer and Regulatory Affairs (DCRA) asked the Office of Planning (OP) to review DCMR 12: Construction Code, Chapter 32: Encroachments as part of the 2015 update of the construction code. OP assessed the city’s projection regulations and their evolution as a basis for recommending changes to be considered as part of the 2015 update. This assessment included the review of previous versions of the construction code published in 1872, 1878, 1882, 1887, 1889, 1892, 1897, 1902, 1917, 1930, and 1941. Based on this assessment and subsequent recommendations, the Construction Code Coordinating Board supported revisions to the projection regulations that clarified their intent and formally defined a process for reviewing modification requests. More information on the Construction Code Coordinating Board and the revisions that were incorporated into the 2015 code update can be found here.

The Government of the District of Columbia encourages everyone to understand building projections, their impact on public space, and how the design of a building and its projections fit into larger goals for enhancing communities across the District. For more information, contact Chris Shaheen, Public Space Program Manager of the DC Office of Planning at (202) 442-7616 or by email at [email protected].

An illustrated presentation of the District of Columbia’s projection regulations including their origins, intent, types of projections, and select regulations.