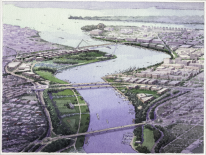 On March 22, 2000, 19 Federal and District agencies committed themselves to the unprecedented effort of restoring the Anacostia River, its waterfronts and adjoining communities and parks through the Anacostia Waterfront Initiative (AWI). In 2003, the Anacostia Waterfront Framework Plan (AWI Plan) set a visionary and ambitious agenda for the revitalization of the Anacostia waterfront as a world-class destination and the center of 21st century Washington, DC. The AWI Plan set in motion the implementation of a comprehensive blueprint for transformation including new mixed-income neighborhoods, environmental restoration, transportation infrastructure, enhanced public access, new connected parks, and cultural destinations. You can learn more about implementation of the transportation vision in particular by visiting the District Department of Transportation’s website on the AWI Transportation Master Plan.

2018 was Year of Anacostia, a yearlong initiative to honor the history and celebrate progress on the Anacostia River and its surroundings. This momentous year also comes at the 15-year anniversary of the AWI Plan. Today, the turnaround of the Anacostia waterfront is a national model for urban rivers in terms of environmental restoration, public access, economic development, and inclusive growth. The Anacostia Waterfront Interagency Working Group continues to carry out the mission of the AWI Plan and collaborates on a bi-monthly basis in order to maximize the potential of the Anacostia Waterfront for economic development, revitalization, recreation, and environmental value, while promoting resilience and equity. As a deliverable of the Working Group, the Office of Planning is working with other agencies to publish an Anacostia Waterfront Progress Report in Summer 2018, which will be a comprehensive look back on the revitalization of the Anacostia River and Waterfront and the issues and opportunities ahead.

The Framework Plan identifies five critical themes to guide the creation of a great waterfront along the Anacostia River. These five themes are: