Thursday, September 29, 2011
The school will be converted to provide 82 units of affordable housing, as well as recreation and community meeting spaces. 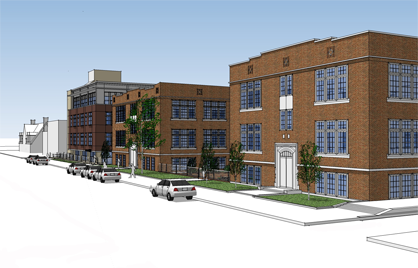 The Historic Preservation Review Board recently designated the Margaret Murray Washington School (27 O Street, NW) as a landmark to be entered in the DC. Inventory of Historic Sites. Immediately following the designation, the Board reviewed and approved plans for the restoration of the building and modifications to the site to prepare it for reuse as affordable housing. The developer will seek federal rehabilitation tax credits to help fund the work.
The main block of the school was constructed in 1912 according to plans prepared by District of Columbia Municipal Architect Snowden Ashford. Additions in 1928 and 1938 - by Snowden’s successor, Albert Harris, and prominent African-American architect Albert Cassell, respectively—were carefully designed for compatibility with the original construction, resulting in a symmetrical, U-shaped plan and similar brick and details.
Originally known as the O Street Vocational School, the school was established to provide “manual training for boys and domestic science and art for girls.” A movement to encourage training in the mechanical, craft and domestic skills spread across Europe and America in the 1870s and 1880s. By the end of the century, Tuskegee Institute founder Booker T. Washington espoused widespread vocational training for African Americans. It was fitting then, that the school was renamed in 1926 for the late widow of Booker T. Washington, “Lady Principal” of Tuskegee and a leader of several black feminist organizations and of the anti-lynching movement. The Margaret Murray Washington School offered instruction to pupils at nearby elementary schools as well as to the high-school-age youths that made up its student body.
The school continued to draw students from a broader area, necessitating additions to the building in 1928 and 1938. During World War II, the school began offering courses in nursing. Its graduates were lauded by the military, and a three-year, evening nursing program grew quickly after the war and was soon accredited. The return of young veterans who had not graduated necessitated the re-opening of the school to young men. A gymnasium addition was constructed in 1971, and this portion of the building is considered to be a non-contributing feature. Over the years, M.M. Washington became part of a cluster of five important African-American schools located on N, O and P Streets, NW between North Capitol and 1st Streets. Individually and collectively, they illustrate the evolution of public education and public-education facilities for African-American students in Washington.
Now vacant, the Margaret Murray Washington School will be converted to provide 82 units of affordable housing, as well as recreation and community meeting spaces. The project calls for much needed repairs and renovation to the 1912, 1928, and 1938 portions of the building. The paved courtyard between the wings will be reconfigured as a residential courtyard entrance with landscaping, which would also provide an accessible entrance to the building. The project will retain the school’s basic floor plan and many of its interior features and trim.