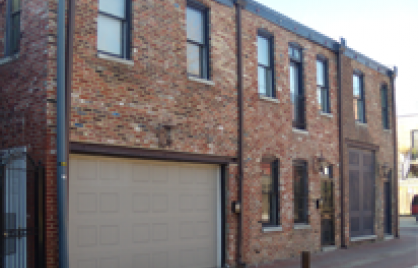 The Historic Preservation Office has embarked on an extensive effort to survey and document alley structures in Washington’s historic districts. Past surveys - particularly those associated with early historic district designations - did not comprehensively cover alley buildings. As a result, data on the city’s historic alley structures is not well documented or easily accessible. In fact, many alley buildings have been demolished, particularly within the past decade.

In 2011, HPO staff began gathering information on alleys through field documentation and photography of important buildings and features as well as research on historic building permits and maps. The information is being catalogued in a database, and will eventually be mapped through the Geographic Information System (GIS). This information will be valuable in better understanding the rich history of the city’s alleys, considering preservation strategies and appropriate alterations for alley buildings, and designing new alley structures that are compatible with the character of historic alleyscapes.

Initial survey efforts have been focused on historic rowhouse neighborhoods, which feature the largest number of alley dwellings, carriage houses, stables, warehouses, and garages. Survey work is already underway in the alleys in Dupont Circle, Capitol Hill, Shaw, LeDroit Park, Mount Vernon Square, Mount Vernon Triangle, Greater Fourteenth Street, and U Street. HPO has collected data on over 500 alley buildings so far, with plans to continue the survey work already in progress and to expand its survey to other historic districts during 2012.