Wednesday, March 14, 2012
Recent designations to the DC Inventory of Historic Sites highlight the important role that women have played in shaping the history and architecture of the District of Columbia. 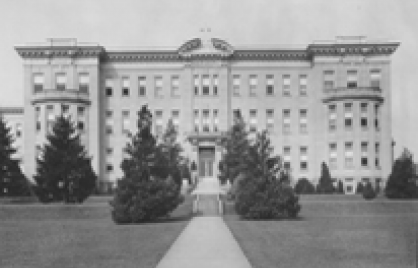 Recent designations to the DC. Inventory of Historic Sites highlight the important role that women have played in shaping the history and architecture of the District of Columbia. In honor of Women’s History Month, these new landmarks are detailed below.

In 1928, Marjorie Webster Junior College moved to a new campus at 1638-1640 Kalmia Road, NW. Established seven years earlier as a night school in downtown DC, Webster School quickly grew to include day classes that could result in a two-year, post-high school “normal” course or a one-year professional degree. From its inception, athletics were a primary focus of the curriculum, as reflected in the school’s original name, the Marjorie Webster School of Expression and Physical Education.

For her new school complex, founder Marjorie Webster selected a former farm on upper 16th Street, where she oversaw construction of a Mediterranean Revival-style villa-like classroom and dormitory building as well as her own residence. In addition to the school buildings, the property includes a mid-19th century springhouse associated with farm complex - a rare survivor of the city’s agrarian past. The property was designated a historic district in September 2011.

The Congressional Club at 2001 New Hampshire Avenue, NW, was established in 1908 during what is considered to be the “heyday of the Women’s Club movement.” During this period, Women were motivated to join clubs for a variety of reasons, from the joint pursuit of hobbies to collective political advocacy. However, one of the most important common aspirations of clubs in the late 19th and early 20th centuries was simply providing a social and physical sphere that had been rarely available to women before. The Congressional Club provided just such an opportunity, albeit to a highly select group of women: the wives and daughters of United States Congressmen, Cabinet members, and U.S. Supreme Court Justices. Since 1914, the Congressional Club has been housed in its distinctive Beaux Arts-style building, designed by architect George Totten.

The Club, which is no longer limited to women, but open to spouses, was built on land donated by member Mary Henderson. Henderson, a visionary, civic activist and local developer, was devoted to transforming 16th Street into a grand and ceremonial boulevard and saw the construction of the Congressional Club as a key component of her plan.

Immaculata Seminary at 4340 Nebraska Avenue, NW was designated a historic district in October 2011. The school played an important role in women’s education and in the history and architecture of the Tenleytown area. The Catholic Church wished to establish a select school for girls in the nation’s capital, so the Sisters of Providence of St. Mary-of-the-Woods opened the school in 1905 in an imposing edifice on the former Dunblane estate. The school building, evoking the Italian Baroque style favored by the Catholic church, signaled a departure from the principally small, frame residential buildings that had preceded it in Tenleytown. Shortly after its opening, Immaculata acquired the adjacent Dunblane house, converting the 19th century stone mansion into classrooms for the school’s younger students. The open land between the house and the school proved ideal for recreational open space for the girls.