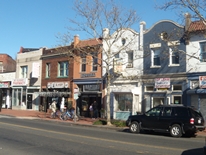 The purpose of the Plan is to create a framework for public and private collaboration and investment to strengthen the economic health and physical character of the corridor. The Plan seeks to improve the economic climate of the corridor; diversify the commercial activity by attracting non-retail and creative uses; and enhance the physical condition of the corridor through sustainable development practices.

The planning process commenced in January, 2009 and concluded in June, 2010 with a Mayor’s hearing. During the planning process, over 600 individual residents and stakeholders participated in crafting, reviewing, and committing to implement the plan. To reach the greatest number of residents possible, OP utilized open public meetings which received 165 participants; two online surveys which received over 300 participants and a Spanish language street survey which reached over 150 Latino residents.

The proposed Plan was published and made available to the public for a 30-day comment period on May 14, 2010, and concluded on June 18th 2010. A public hearing was held on June 19th, 2010. Archival information on the public engagement process, hearing transcript, and public comment responses can be requested through the project manager.