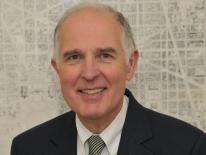 Mr. Maloney received his architectural training at Princeton University and the University of Pennsylvania, and his graduate degree in urban planning with a concentration in historic preservation from George Washington University.  He is the recipient of the 2008 Charles Atherton Award from the Georgetown Citizens Association, 2008 Stanford White Award from the Patterson House Foundation, and 2011 Glenn Brown Award from the Washington Chapter of the American Institute of Architects.